What was once farmland and an abandoned quarry has become a small piece of paradise in the northwest Chicago suburbs. Wild Onion Brewery is one of Chicago’s first craft breweries of the modern era, firing up their first batch of Paddy Pale Ale in 1996. Family-owned, and located just off Route 14 in Lake Barrington, IL, this small but mighty brewer has seen steady, well-managed growth for over 23 years.

With roots going back to the Kainz family dairy business in Chicago in the early 1900’s, founding brewer Mike Kainz had always been intrigued by family brewing stories. His grandfather and uncles had converted part of their dairy to beer production on the sly during Prohibition to keep thirsty Chicagoans happy in the 1920’s. There were stories of fermenting beer in stainless steel milk tanks and rolling barrels down the alley behind the dairy at night.

As an Economics/French major in college, Mike traveled to France for school and fell in love with the Belgian and German beers. He came home and started home brewing to create beers with more flavor than what was currently available in the USA. He just dabbled in the brewing art, and became quite proficient at it.

After college and a tour in the Peace Corp, Mike said his “this-is-it” moment came when he took some time off to bike up the west coast from California to Vancouver. One day, he stopped in one of the country’s first brew pubs in the Washington state area. Tired and thirsty from the riding, Mike had a local-crafted beer and decided brewing beer was a great idea.

Back home, Mike started brewing in his parents garage with a small 1/2 barrel system. After perfecting his brewing style and itching to move out of the garage, Mike pitched the brewery idea to his father and brothers Pat and John in 1995. He wanted to start a family-owned brewing business.

The family agreed and they leased an old 2,400 square foot warehouse in Lake Barrington, turning it into their new beer company, Wild Onion Brewing. Starting small with a basic system, the Kainz family rolled their first kegs out the door in 1997. By the following year they were bottling their brews and gaining in local popularity. 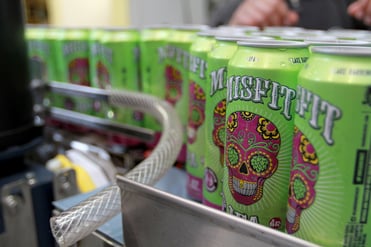 In 2000, Wild Onion was ready to expand. A shuttered tavern was available down the street, located on a former gravel quarry complete with a small lake. The family had a vision of rebuilding the place as a English-style pub with dark wood and a warm cozy interior. Ground was broken in 2002 and by 2003, Wild Onion Pub opened its doors. They installed an 8-barrel system (built with re-purposed dairy tanks) and started brewing unique flavors including one of the first pumpkin ales and local IPAs.

The pub grew and became a regional favorite. Once again they added to their capacity in 2008 with a used 17-barrel system, brewing new flavors and seasonals. A large banquet facility was built to cater to the people who wanted to hold events and weddings at Wild Onion. The new huge outdoor deck overlooking the lake was a hit, especially with the attached waterfall feature.

Since day one, the Kainz family has believed that investing in both the breweries future and the planet’s well-being was a common goal. They were “green” and “sustainable” long before it was popular, using a solid commitment to energy-efficiency and resourceful processes. This carries over to the surrounding area at the brewery, too. Long before they opened the doors, they knew their 20-acre site needed to be transformed. A former gravel pit/garbage dump, the lake and adjacent land was scarred from its former use as a scuba diving site. 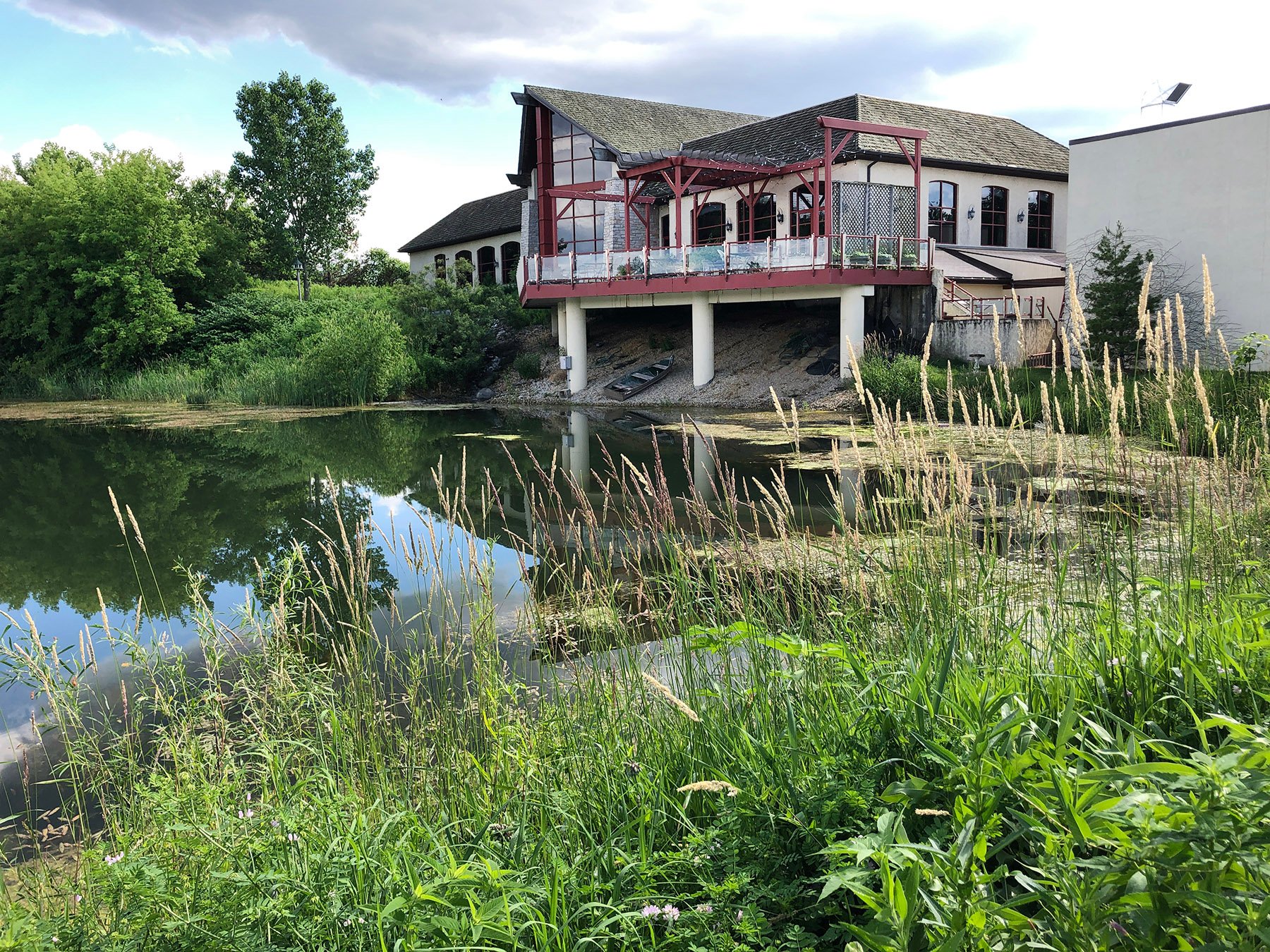 The lake bottom had a liner cover held in place with concrete and tires, and the shore was covered with Astroturf. There was very little vegetation. The site was dead and lifeless after 50 years of human impact.

The Kainz family completely restored the 20 acre site, planting native plants, grasses and wild flowers. They cleaned both the land and water, nursing the prairie back to health. The lake has now become a stopping point for many migratory water birds, and the parade of wildflowers blooming from early summer through fall is a beautiful site to witness, especially as you sip on a well-crafted pint on the patio overlooking the water.

In addition to having a very energy-efficient building structure, Wild Onion heats and cools 50% of their building space using geothermal technology. They built a network of heat pumps and a circulating loop, sunk to the bottom of the quarry, that is able to both heat and cool the building using the earth’s stable temperature throughout the year.  Basically, heat is removed from the building in the warm months and transferred to the lake. The inverse occurs in the cold season, when heat from the lake helps warm the building. They manage to keep their almost 30,000 square feet of restaurant and brewery space at the right temperature using a fraction of normal HVAC systems. This reduces their “carbon footprint” greatly by using less fossil fuels. 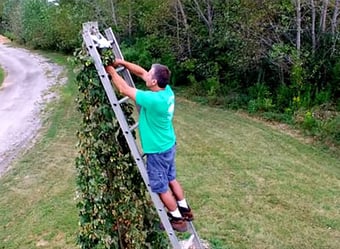 But they weren’t done yet. Mike has always been searching for the best flavor profile for his beers, with hops as the driving force behind his many ideas. Most hops these days are dried and added in pellet form during the beer-making process. Fresh hop flowers are the only way to get intense flavors from hops, so Mike built a small scale hop farm where the original garbage dump used to be. This doesn’t begin to cover the required hops for their annual brewing, but it does let them brew a special wet-hopped seasonal IPA called Otis once a year!

Wild Onion expanded over the last few years, adding a large 50-barrel system into a new addition on the brewery. The increased capacity lets them brew their flagship brands like Misfit IPA easily while using their older 17-barrel system to do seasonal and experimental brews. They also opened a new location closer to Chicago in Oak Park, Illinois. The Wild Onion Tied House, following their English pub format, is a satellite brew pub that serves made-from-scratch dishes specifically designed to incorporate their ales and lagers. 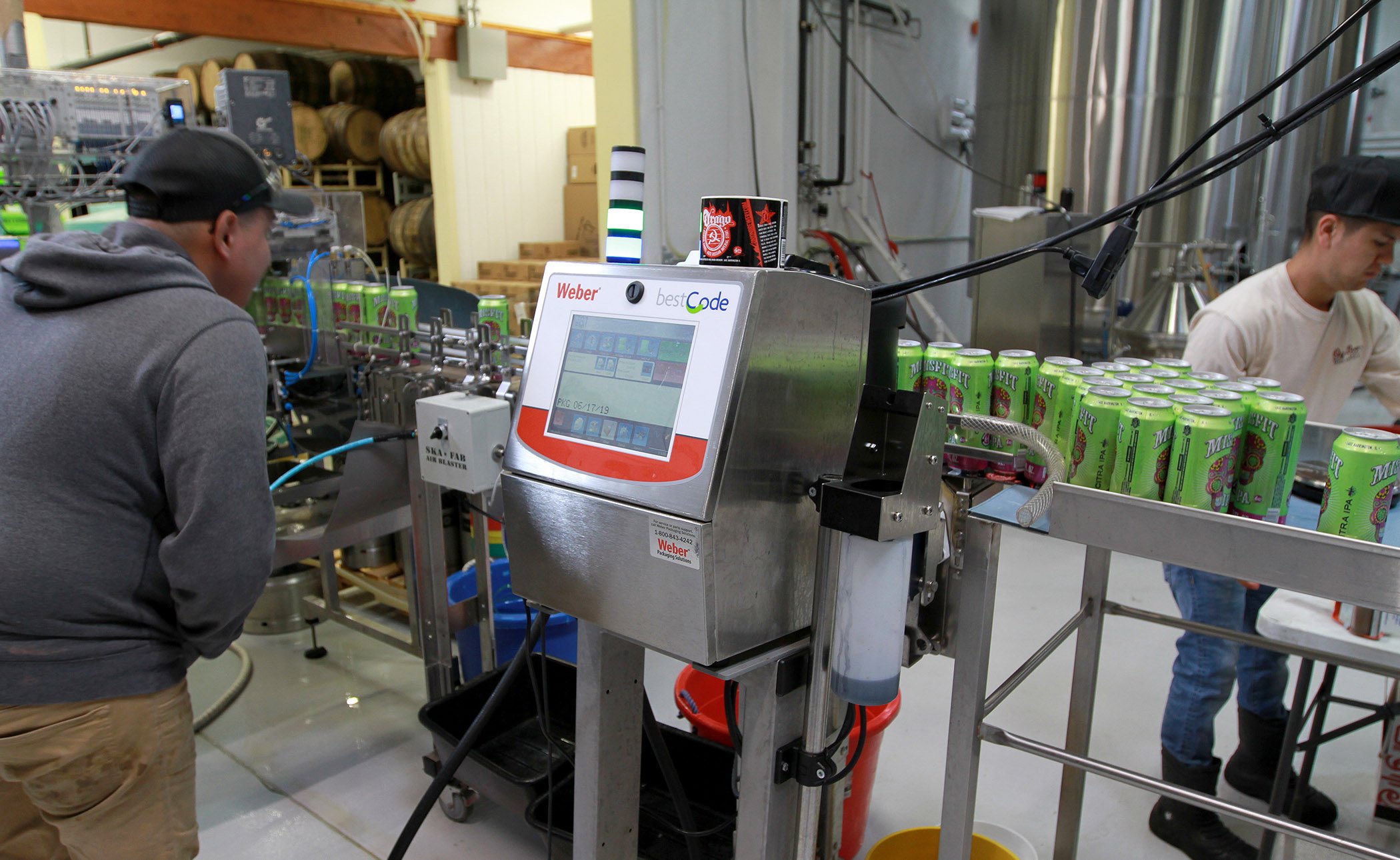 Mike has added even more to the new 50-barrel system to enhance flavor profiles and increase production efficiency. A new centrifugal filtering system has replaced their old process, allowing their beers to retain their flavor complexities and hop aromas often stripped out by conventional filtering. This also adds to the shelf stability of their products. Their Wild Goose filling system is attached to a Ska depalletizer for consistent filling and canning of different size containers. This has allowed them to start canning new 19.2 oz. tall boy cans that are popular at music venues and sports events. 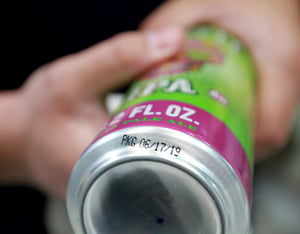 One of their recently equipment additions is a BestCode continuous ink jet system from Weber Packaging. Installed right after the cans leave the filler, a “Packaged by” date is added to the botton edge of the can. It is especially important for brewers to have this information on all their products to ensure that only fresh products are distributed to stores and venues. Brewers know that some beers are shelf-stable for longer periods of time than other beers. If a customer gets an out-of date beer and it tastes off, they might judge that all your beers are like this one. It pays to keep things fresh and tasting their best.

While Wild Onion uses preprinted cans for their flagship brands, they are trying a new creative solution for their smaller seasonal runs and experimental beers. It takes months to get cans printed and you have to buy a minimum of a half-truckload. If a beer is not selling fast enough, a brewer could be stuck with a lot of useless cans. To circumvent those issues, Wild Onion is getting some of their cans printed a matte black with just a ring of logo identification at the top of the can. These cans are ordered in bulk and can be used on all their small-batch runs. 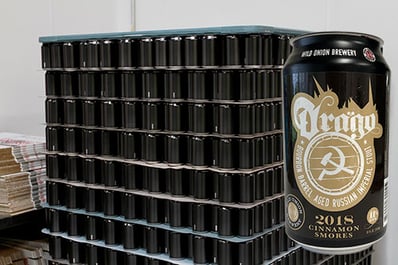 By purchasing custom digitally-printed labels, they can get an up-scale branded look with the labels as the unique element for each flavor. Plus the labels can be purchased in the minimal amounts needed to match the brew run.  No extra unused cans or labels, saving money and warehouse space. Weber Packaging has been supplying the custom labels for Wild Onion Brewery, usually printed on a white gloss material with a gloss protective lamination.

Right now Wild Onion is brewing a host of great seasonal beers. Hair of the Frog, a Blonde Ale, is a collaboration with Chicago’s Brookfield Zoo where 10% of all sales go to the Zoo. The Drago Bourbon Barrel Aged Russian Imperial Stout is made in a couple of varieties including Cinnamon Smores (really). And, of course, their flagship Misfit IPA had great success with the Pineapple Misfit version. Illinois is legalizing cannabis in 2020, so could there be a CDB or THC version in the future?? Better stop by soon and check out their latest creations. 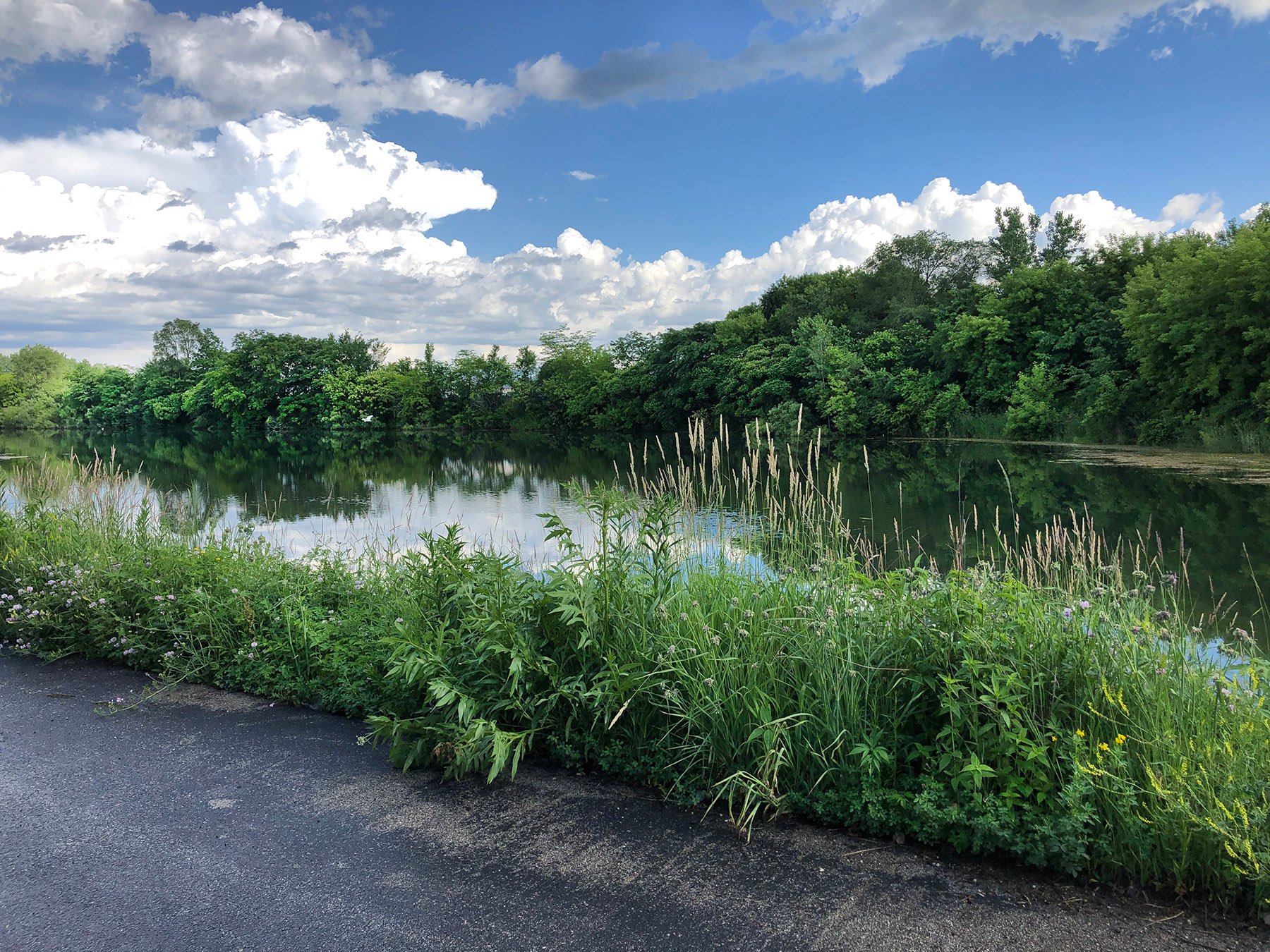